Recently, I had the privilege to work on the restoration of two antiquarian books owned by a local law professor. 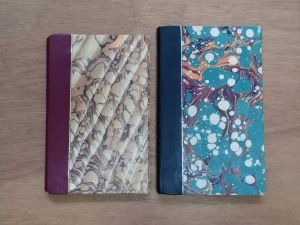 The two completed books. On left, the Spirit of Magna Charta and the Constitutional Proposal for the Federation of Malaya

These books, The Spirit of Magna Charta (1841, bound by Wildy & Sons, Lincoln’s Inn, London) and Constitutional Proposal for the Federation of Malaya (1957, Her Majesty’s Stationery Office, London) represented two important points in the history of UK Law. 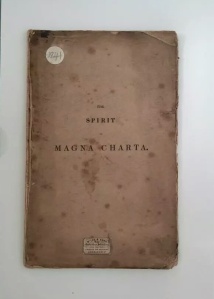 Original condition of The Spirit of Magna Charta (1841)

The 1841 book was a treatise on the importance of the Magna Charta, which was sealed by King John under pressure from rebelling barons on 15 June 1215. The document effectively placed a limitation on arbitrary royal authority and sought to establish that the king was subject to the law and not above it. Over the many centuries, it was seen as a symbol of struggle for liberty and the strive for greater democracy. The American revolutionists, the 19th century England working class and even the new pioneers of Australia all saw it as a “People’s Charter” and the basis of their own country’s law to recognise the rights and will of the people.

This awareness and respect for the Magna Charta underlined UK’s efforts to progressive grant independence to colonies worldwide, including Malaya. In 1946, 11 states in Peninsular Malaya came together to form a single British Crown Colony known as the Malayan Union. UK continued to enjoy strong, amicable ties with Malaya throughout the entire period of the Malayan Emergency until it was confident enough that communism was no longer a threat in Malaya and hence independence was granted. 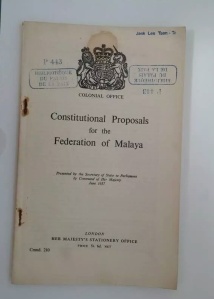 Original Condition for Constitutional Proposal for the Federation of Malaya (1957)

When Singapore joined Malaya in 1963, the Federation Constitution was adopted and when the island gained independence in 1965, part of the constitution remained and was refined to become our own State Constitution. Hence, the proposal could be seen as the genesis of Singapore’s Constitution as well.

The two books came to me as pamphlet sections bounded together using metal staples. The 1841 book was definitely in a worse condition than the 1957 one but notwithstanding, the ferrous metal staples had corroded over the years and had become weak and friable, leaving a bright orange stain on sections of both books. The staples were removed and parts of each folio affected by corrosion were cleaned and patched up using lightweight repair papers. 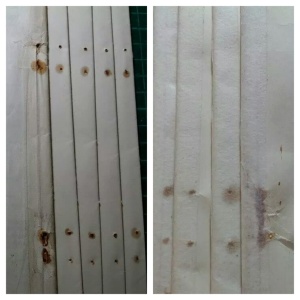 Damage caused by metal staples (left) and the repaired sections

Once strengthened, the sections were hand-sewn using French-link stitch on tapes. The completed text blocks were then glued, rounded and backed to create a rounded book spine. The client had requested for a traditional look for the two books, hence quarter leather binding was chosen. The calf skins, in black and red, were pared down and pasted onto the spine. This was then followed by the pasting down of marbled papers for the covers and the endpapers. 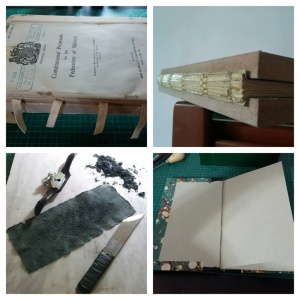 You would probably notice that the endpapers were attached onto new flypapers instead of the original book. This allowed for maximum reversibility in the future if the books are damaged or if the owner wants to recommission a new binding for the books. The flypaper can simply be cut away and the original textblock can be removed. 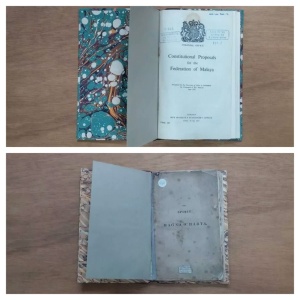 In total, the entire job took about 2 months to complete. Considering that I have to juggle full-time work, weekend bookbinding workshops and other activities, the process proceeded very smoothly. While I cannot say I have acquired a fondness for law history, I did gain quite a bit of law knowledge flipping through the two books, especially on the rights each citizen is entitled to.

The last workshop for Season 2 of [ A Bookbinding Cause] was held on 31 May 2014, yet the season only came to a proper close last Sunday when The Thistle Bindery co-organised the first-ever bookbinding event for kids with the team behind Singapore Mini Makers Faire. Titled “Let’s Bind a Book”, the event held at Singapore Science Centre bought together fellow bookbinding instructors, co-instructors and friends whom I had the privilege to teach and meet during the course of Season 2’s [ A Bookbinding Cause ]. 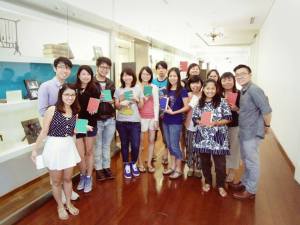 It felt like a complete circle. I saw participants who came for their first taste of bookbinding returned for more workshops in subsequent months. With more practice and confidence, these participants stepped up to become co-instructors for the bookbinding event. Some even went the extra mile by taking the initiative to express their loves for bookbinding and urban sketching by leading a sketch walkabout during the bookbinding event. I felt humbled by their efforts and the hard work every instructor and co-instructor put in for the event. 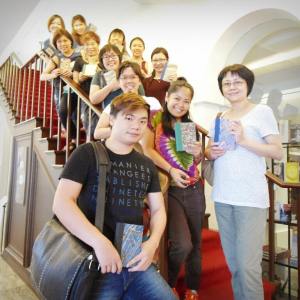 Beyond the regular fortnightly workshops raising funds for charity, these “extra”-ordinary events, such as Let’s Bind a Book, Singapore Makers’ Meetup and Makers’ Block are important causes which The Thistle Bindery supports and participates in. They resonate with the practice’s twin objectives of making bookbinding accessible to all and supporting worthy causes. More so, such events are also excellent platforms for past participants of our workshops—now budding bookbinders—to showcase their bookbinding skills and to share their bookbinding passion with more people. 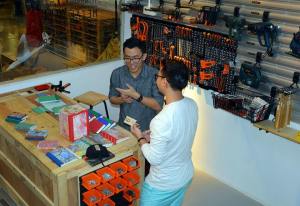 Each update, photograph and news put up on Facebook in the first half of this year would not be possible without the support of our participants, collaborators and friends. It was a little overwhelming to realise that almost 100 people had attended the 8 workshops in the past season. This bought in a substantial amount of donation for our charity beneficiary, Loving Heart Multi-Service Centre.

The attendance figure and the amount of donation will pale in comparison to the support and effort from our venue supporters. Without the generous venue subsidiaries from The Arts House and The General Co, [ A Bookbinding Cause ] would not have taken off at all! Their steadfast support and accommodation provided the motivation and ease for the bindery to conceptualise and realise new programmes and collaborations.

The Thistle Bindery may carry different connotations to individuals. It could merely be a Facebook page of nominal interest; or it could simply just be a source of bookbinding instruction.  Yet personally, the impetus for starting the art practice then, and still holds true now, remains the desire to provide a platform for bookbinders and book arts instructors to gather and collaborate, and to grow the number of hobbyist bookbinders in Singapore.

The Thistle Bindery is an ever-growing community and [ A Bookbinding Cause] shall continue to be the practice’s flagship medium to attract more people to pick up the art of bookbinding.

Pooja of Notabilia and I recently had the privilege to present a short 10 minutes presentation on Community Book Arts during the Maker Meetup event organised by SG Makers. It was a fantastic opportunity for me to rethink and set down what The Thistle Bindery meant for me, beyond just a hobbyist art practice that I started one year ago. This post is accompanied by slides presented in my segment. 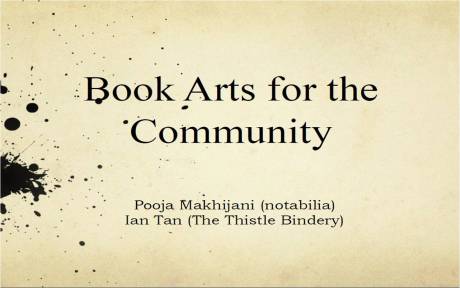 After conducting more than 20 workshops, the bindery had taken on a life of its own.  Similar to a real bindery business, I find myself dealing with everyday logistics problems and administrative issues such as looking for spaces to teach bookbinding workshops and sorting out sign-ups, payments and donations to the charity beneficiaries, etc.

There were also moments of contemplation and reflection. Tricks and tips simply learnt and absorbed during my training had to be rationalised and distilled to participants in my workshops. Tools that were not available in Singapore were substituted with those found easily in hardware stores and haberdashery shops, often after a long period of trials. This period of gestation before I started teaching in 2013 was an important time for me to become aware of the bare essentials in my craft and how the potential of simple tools can be maximised to perform as well as bookbinding specific tools such as laying presses, guillotine and rollers.

What excited me the most was seeing how the book arts community had grown through the regular [ A Bookbinding Cause ] series of workshops. Familiar faces appear at consecutive workshops; contacts and connections were forged among participants and regular comments and messages were left on my Facebook page. What left the most indelible impression was perhaps realising how small and connected the creative circle in Singapore was. There are crafters who know makers, designers who talk to 3D printing tinkers, as well as a whole group of weekend artists with interesting day jobs and the passion to pursue their chosen craft in their free time. Initiatives such as Urban Sketchers and Sg Makers inspire and help define what it means to build a community. Particularly, the “many hands” approach in organising activities is important in vesting ownership in everyone and to allow events and encounters to happen spontaneously.

Building The Thistle Bindery allowed me to come in contact with many supportive people which I am indebted to. Some had came forward to provide a space for the charity bookbinding workshops, such as Jing, Colin and The Arts House; others who had given me a platform to test out ideas and showcase my skills, such as William and the wonderful girls from Trade School Singapore. Such avenues were and are still great training grounds for my practice and they helped build up my experiences incrementally towards loftier ideas like advocating the use of bookbinding and other artistic mediums in cultural mapping and urban studies activities. 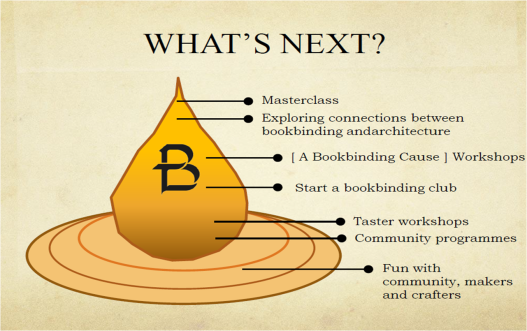 The Thistle Bindery’s bookbinding pursuit can be represented in a wider community context akin to a drop in a pool. A pool of like-minded crafters, educators and thinkers, not just in Singapore, but regionally and internationally.

At the apex of the practice is a constant yearning to learn more advanced bookbinding techniques and at the same time, to regularly rekindle the love for the craft and to connect with my beginning. Owl and Lion, where I first learnt bookbinding will always be a magical place of endless possibilities.

The core of the practice will still focus on bookbinding workshops where I hope more people will be interested to learn. [ A Bookbinding Cause ] remains as the practice’s flagship programme and vehicle to raise funds for charity while imparting traditional bookbinding skills at affordable rates.

As the current season of bookbinding workshops come to a close in end May, it is yet again time to plan the calendar for the second half of the year. There will be interesting activities for the community, not just in Singapore but also regionally. There will also be interactions with other bookbinders from around the region. And at the end of the day, the most important is still to ensure that coming for one of The Thistle Bindery’s activity remains enjoyable, fun-filled and relaxing. 🙂